This is the way...  If you've not seen the Mandalorian yet then Disney+ is worth a subscription just to see this one show.  It's awesome and feels like we've gone back to the original Star Wars trilogy in style and direction.

LEGO only released one set related to the Mandalorian so far - the AT-ST.  This features in episode 3...

While we wait for the Mandalorian and Child Brickheadz, and the Razorcrest ship to be released, we took our AT-ST and lit it up. And here's it in action - concept art found at comicbookmovie.com 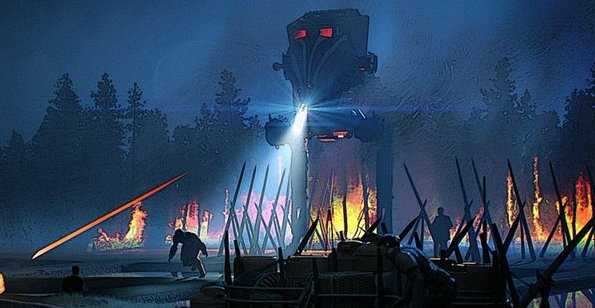 There's a few options here : Red Eyes, Blasters and a spotlight are the main features.

Red eyes we can do easily enough - a nice bright Red Strip light inside the cabin will make the eyes glow red.

Blasters also not too hard - we have the awesome new Gun Effects Board which recreates blaster fire well.

But the spotlight?  We have White bit lights and Large White Bit lights which would do a good job, but having tested the white distracts from the blasters.  You would need to be able to easily turn that one light on and off which seems overly complicated for this small model.

To light up our AT-ST we used the following parts:

1. First check you have all the bits needed.  From top-left we show here: 2. Fit the batteries.  These go face up with two batteries (CR2032 standard cells) on top of each other.

3. Pop the double cannon unit from the front of the AT-ST. 4. Pull it to pieces and start by threading the plug end of a Red Bit Light through that Technic Half-Pin. 5. Pull the wire through and then carefully bend the wire so the LED disc sits neatly on the end of the Technic pin.  Then add a LEGO stud on top. 6. Repeat for the second Bit Light and then reassemble the cannons. 7. Next let's move inside.  Take the Red Strip Light and remove the tape from the back to reveal the sticky tape.  Attach a 5cm Connecting Cable to one end and stick firmly to the roof of the AT-ST, close to the front as shown. 9. Pop the wiring into the cabin on the AT-ST and link the cable from the Red Strip Light into the expansion board too.  Again - any socket is fine.  Turn on the power switch on the Round Battery Pack and check the strip light comes on! 10. Refit the double cannon to the front of the AT-ST and carefully run the wires as shown.  This helps hide the wires. 11. Pass the wires under the head of the AT-ST (it may be easier to remove the head at this point!) and secure them centrally using the 1x4 plate as shown.  This keeps the wires away from the shooters. 12. Reassemble the AT-ST head then remove one of the side panels so we can route the wires into the cabin. 13. Connect the two Bit Light wires to the Gun Effects Board.  It doesn't matter which ports - they're all random - and set the slider to the middle setting.  Feel free to experiment here but I found this worked best on this model. 14. Carefully re-attach the side panel and place the components into the cabin.  Make sure the battery pack is on top for easy access, and poke the wires down so they don't stick out. We think we found a good balance here between cost and result - if you want to take it further why not look at using the other two ports on that gun effects board?  There's a single big blaster on the left of the AT-ST and two on the right - these could be rigged up with further Bit Lights and made to fire randomly too.

We've had great fun lighting up our AT-ST and hope you will find inspiration for how to light up your Lego.

If you would like to buy the parts used in this project just drop us a line and we'll organise a custom bundle with just the parts you need.  Or order from our online shop and use the left-over parts for your next project!